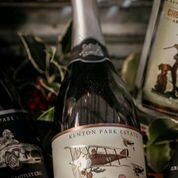 Our Wine Label was designed by Bryn Parry who has humourously captured the fun side of the antics that go on here at Kenton Park Estate involving the hilarious behaviour of our Pheasants that roam freely throughout the Vineyard and compete for the Grapes with our resident Rabbits. Our Gun Dogs are more than happy to assist the Pheasants in their quest to regain sole occupancy of the Vineyard.

The Label was also designed in memory of the Estate Owners Great Grandfather who was involved in the design of the iconicSopwith Camel, which was a Bi-plane Fighter aircraft that went into service in 1917 and coincides with the release of our Blanc de Blancs Sparkling Wine a 100 years on in 2017.

The Sopwith Camel was the most famous British Fighter Aeroplane of World War I. It was called The Camel because of the hump-shaped protective covering over its machine guns and it shot down more enemy aircraft than any other Allied Fighter 'plane during World War I. The Camel was powered by a single rotary engine and was armed with twin synchronized machine guns.

Our Blanc de Blancs Wine is made from the best hand-picked Chardonnay Grapes from the 2014 Harvest. After fermentation in stainless steel tanks, it is then aged in used Oak Barrels for 3-6 months before being bottled for secondary fermentation in May 2015. It is then matured in the Cellar for almost 2 years before being released in April 2017.

We hope you really enjoy this Wine.

Save this product for later
KENTON PARK ESTATE